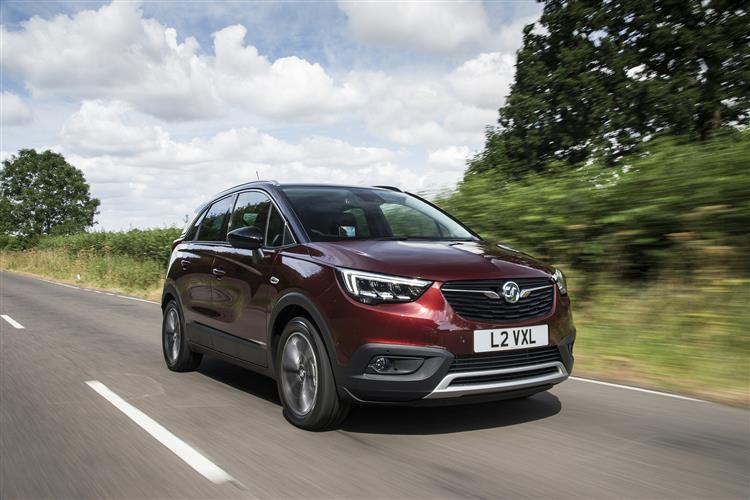 Here's a very fashionable little Vauxhall, the Crossland X. It's a smartly turned-out, family-orientated compact SUV that claims to be perfectly pitched for its target market. It slots in just below the Grandland X model in Vauxhall's SUV line-up. Here's a car with enough space inside to comfortably function as an ideal family second car, yet one that can also slot into the tightest supermarket space. Under the skin, it sits on the same F1 platform as a Citroen C3 Aircross and it shares a range of PSA Group powerplants with both that car and a Peugeot 2008. This means a selection of 1.2-litre petrol engines and a couple of 1.5-litre diesels. Vauxhall has built upon the French formula though - and with a little style too. Hence, for example, the fashionable contrast-colour roof. It all sounds quite promising doesn't it? We took one to Norfolk for the weekend to try it.

Thanks to its Peugeot-derived platform and light PSA Group engines, this Crossland X is notably light (unlike its erstwhile showroom stablemate, the old Mokka X) and you really feel that the first time you turn into a bend with any sort of real speed. Don't get us wrong: this Vauxhall isn't any sort of driver's car, but it's certainly a lot more agile and chuckable than you might expect, something we experienced for ourselves on the undulating Norfolk roads we came across as part of our weekend family test drive. Engine-wise, Crossland X buyers are offered a PSA-sourced range of three cylinder 1.2-litre petrol powerplants, plus that French group's 1.5-litre diesel developing 102PS in manual form or 120PS as an auto. If budget is everything, there's a price-leading normally aspirated 83PS petrol unit, but easily the best option in the line-up is the mid-range 1.2-litre 110PS turbo petrol powerplant that most likely buyers will choose. It's the only engine on offer with the option of an automatic transmission, but this gearbox makes quite a dent in the efficiency figures. If you need more power, then your Vauxhall dealer will steer you towards the 1.2-litre 130PS model we tried as part of our test. Both petrol turbo engines come with the option of 6-speed auto transmission. You wouldn't expect a car in this class to have any sort of 4WD system and sure enough, that's not an option.

Buyers in the smallest SUV segment tend to prioritise aesthetics more than those in larger Crossover categories, so with that in mind, it's safe to say that this Crossland X starts off with something of a head-start. Provided you choose a variant with this contrast-coloured roof, there's quite a sophisticated, personalised feel here. Inside, the centrepiece of the smartly styled dash is a beautifully-integrated Intellilink infotainment screen which incorporates the usual DAB stereo, Bluetooth 'phone and informational functions. Include the optional satellite navigation system and the screen size increases from 7 to 8-inches. The dash looks quite smart thanks to chrome-trimmed vents and smartly-presented switchgear - the neat climate control panel for example. Upper-spec variants get lovely contrast-stitching on the seats and steering wheel too. Getting comfortable is easy, especially if you've specified optional 16-way adjustable 'Ergonomic sports-style' AGR-approved front seats certified by the 'Campaign for Healthier Backs'. In the back, there's the useful option of a sliding rear bench, behind which lies a 410-litre boot. This proved to be large enough for my family's weekend luggage and is accessed through a decently-sized rectangular aperture. Push forward the backrest and up to 1,255-litres of fairly flat space is opened up.

Prices sit in the £18,500 to £25,000 bracket and there are five trim levels - 'Griffin', 'SRi Nav', 'Business Edition Nav', 'Elite' and 'Elite Nav'. Vauxhall reckons that over 65% of sales of this car will be to private buyers, a much higher percentage than with its Corsa supermini model. Hence perhaps, the emphasis on petrol power in the line-up, all the green pump-fuelled engines being 1.2-litre three cylinder units. If at all possible, try and avoid the entry-level normally aspirated 83PS variant and find the extra that Vauxhall asks for the pokier yet more efficient turbocharged version of this powerplant. A premium of around £1,100 over the base engine gets you a Crossland X 1.2 Turbo with 110PS and a 5-speed manual gearbox. Stretch to mid-range 'Business Edition Nav' trim and you can get yourself the same unit with 130PS and a 6-speed stick shift (which means finding a further £1,000 on top of a base-spec 1.2 Turbo 110PS model; think just over £20K). That's what we tried. What else might you need to know? Possibly the fact that on petrol turbo models, a 6-speed automatic transmission costs around £1,300 more. As for diesel power, well we'd question whether you really need it, given the relatively small annual mileages likely to be covered by this kind of car. If you really are set on black pump motoring, then you'll need a budget starting from around £20,500 for the 1.5-litre 102PS 'BlueInjection' diesel. A couple of thousand more gets you the same engine with 120PS and an auto gearbox.

This Crossland X gets PSA Group petrol engine technology which sees all the green pump-fuelled Crossland X models being powered by a three cylinder 1.2-litre powerplant that's vastly cleaner and more frugal than anything we've ever previously seen in a petrol-engined Vauxhall SUV. Let's get to the figures. The 1.2 Turbo 110PS Crossland X variant that most customers will buy delivers up to 47.1mpg on the WLTP combined cycle and 109g/km of NEDC-rated CO2 in manual form with 16-inch wheels, returns that are genuinely difficult to beat in this segment. The 130PS version does fractionally better for some reason, recording 47.9mpg and 108g/km.. For the base 83PS normally aspirated peterolk model, the figures are 47.1mpg and 106g/km. Go for the 1.5-litre diesel option and you'll find the 102PS variant able to deliver 61.4mpg on the WLTP combined cycle and 106g/km of NEDC-rated CO2. You'll also need to know that Vauxhall includes a three-year, 60,000 mile warranty as standard, a package that can be extended up to five years and 100,000 miles at extra cost. A year's free breakdown cover is also provided, along with a six-year anti-corrosion guarantee. Service intervals are at 20,000 miles or every 12 months, depending on which comes round sooner.

In the Crossland X, Vauxhall has delivered the kind of SUV Crossover that the supermini-based segment of the market really wants. Buyers in this sector who would previously have ignored their local Vauxhall showroom on their way to buy something like a Captur or a Juke will these days find the brand much harder to overlook. Overall, we'd say that if you happen to run a dealership with a Griffin brand logo above the door, there are great grounds for optimism here. You have to reason that if Vauxhall could make the old Mokka into a sales success, then the prospects for this Crossland X are pretty promising. It is, after all, a significantly more competitive product, a handsome, comfortable and versatile small SUV that demonstrates just why this class of car is so popular. In short, it's the kind of model Vauxhall needs to make. The rest is down to you.